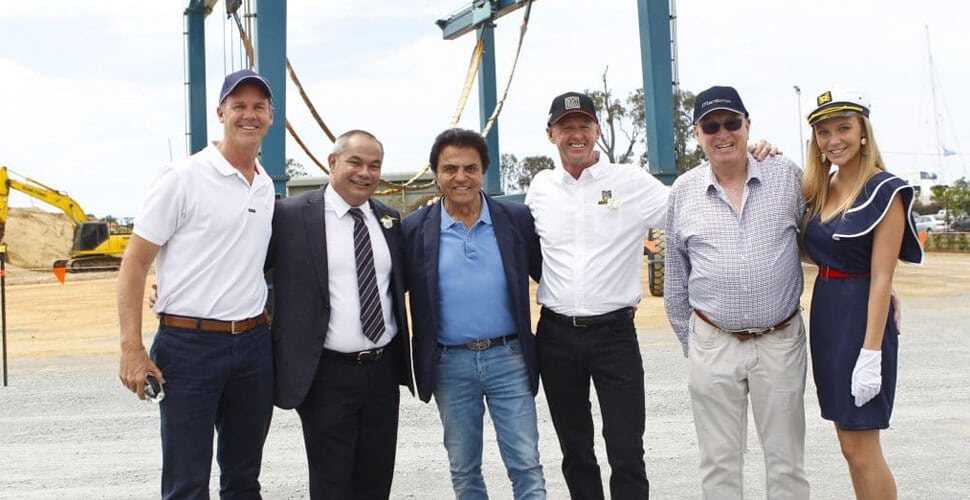 Work has begun on stage 1 of a $100 million major expansion at The Boat Works – doubling its current 20 acres, following the Gold Coast Mayor Tom Tate turning the first sod today on the project which will boost the marine industry and employment in the region.

The Mayor of the City of Gold Coast, Tom Tate, has thrown his support behind the next phase of the evolution of The Boat Works, declaring its plans for expansion a “Major Project” of particular significance to the region for the size of investment and the impact on the community in terms of jobs and increased business.

Superior Jetties won the contract to build the new 50-berth marina, which it’s anticipated will welcome its first vessels in early December. Stage 1 is due for completion in April 2019.

The Longhurst family arrived in Coomera in 1974. As the visionary behind Dreamworld, John Longhurst was a pioneer ahead of his time. John and his sons, Tony and Rodney built Australia’s first theme park and over the subsequent four decades, created many thousands of jobs and positioned the Gold Coast as Australia’s premier tourism destination.

The new precinct will create Australia’s first DRY MARINA, devoted to dry storage for up to 200 boats from 25 to 100ft, as well as expanded refit facilities, the new 50-berth marina and waterfront village comprising boutiques and restaurants.

The expansion will prove a boon for the Gold Coast’s entire marine precinct, generating employment and attracting more vessels to the Gold Coast.

The Boat Works currently lifts 50 boats per week with its Travel lifts and Sealift equipment and employs 1,000 personnel, figures which are forecast to double in the next three to five years.

Tony explained “The entire Coomera Marine Precinct will benefit from the Gold Coast Waterways Authority’s commitment to dredge the Coomera River in early 2019, granting year-round access for vessels that previously may have been reluctant to call in to the Gold Coast for repairs, refits and storage because of shallow waters at low tide.

“The Gold Coast will become the port of call for every type of boat – from leisure craft to larger commercial vessels – as they travel the east coast between Melbourne and Sydney and the Whitsundays.

“The benefits of this increased visitation will flow on to the south-east economy in the form of jobs and business in all sectors.”

Another benefit of the deeper water is improved conditions for marine life, which is already evident in the first phase of works along the Coomera River.

Gold Coast Waterways Authority CEO, Hal Morris added “This visionary investment is proof positive of the growing strength and value of boating on our waterways”.

“There are already more than 30,000 vessels registered on our waterways and that is increasing by 1,000 every year. Waterways are at the centre of Gold Coast and Queensland’s lifestyle.”

John Hogan, CEO at Superior Jetties said “The marina is a specialist working marina where vessels can be provided with all types of servicing needs. There will be over 40 specialist berths to 30m that include multihulls. Special close deep water for crane and forklift access allow in-water refits, as well as a shiplift and ramp facility to service upland storage of vessels on a hard stand.

“The berths will be locally manufactured using Superior Jetties Super Elite concrete system and delivered via the Coomera River.  The new dredging program from GCWA assists to facilitate this work and stimulates investment.”

Officially declaring the project underway at the riverfront site adjacent to The Boat Works, Mayor Tom Tate said: “Expanding the City’s economy is vital for our future growth.

“The marine sector is enjoying considerable growth and this development will take us to the next level nationally and internationally.

“We will become the Number One port of choice along the entire east coast and I commend The Boat Works for opening up our marine service and logistics facilities to a global market.”

error: Content is protected !!
0
0
Your Cart
Your cart is emptyReturn to Shop
Continue Shopping